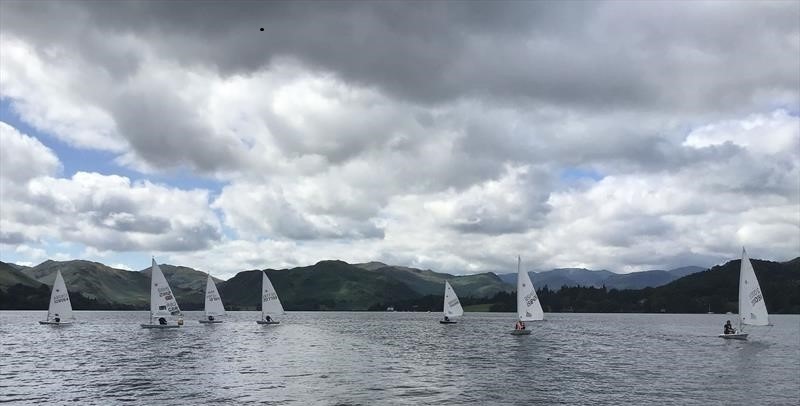 Our very own Tim Hulse was the coach at a weekend of ILCA training at the club on July 30 & 31. This is Jonathan Nicoll's report on a successful two days for members of the UYC 'Laser' fleet:


Whichever dinghy class you sail, one of the benefits of belonging to the class association is that most will offer some kind of informal training to help members get the best out of their boats. This year UKLA have gone a step further by inviting clubs to apply for one or two days of professional coaching for their members.
Thus it was that seven keen sailors ranging in age from 16 to 69 gathered at Ullswater on 30th July for two days of intensive coaching from former UYC member, UKLA Training Officer and expert ILCA coach Tim Hulse.
Saturday morning started with a shore session on sail shape and a detailed explanation of how and why to adjust it with the various controls.
On to the water with enough wind to pull on those controls harder than ever before, particularly in the meatier gusts, to try to get the boat flatter than you thought possible. Sailing along with a RIB behind you and a coach, even one as affable as Tim, armed with an i-pad to catch your every slip and shouting "Boat flat! Boat flat!" every time you heeled even a degree seems to concentrate the mind wonderfully.
Minds concentrated, we headed ashore for lunch and a further theory session. Back out on the water for an hour trying to execute the perfect tack and gybe followed by a couple of short races. Exhausting work, with more tacks than you would normally do in a week of racing.
Sunday the wind was lighter so we spent the morning afloat trying to get our boats at ridiculous angles prior to practising roll tacks and gybes, which we did with varying degrees of success and swimming. But as Tim says, if you are trying it properly and get it wrong, you swim. If you get it wrong and don't swim then you weren't trying hard enough. After lunch the wind was really too light to sail so we had a prolonged debrief and packed up a little early which meant we were home in time to roar on the Lionesses.
Huge thanks must go to Tim Hulse and UKLA for a superb weekend. Even those with a decade or more sailing the boat formerly known as a Laser had plenty to learn and a typical sentiment expressed by one participant was "the best weekend ever".