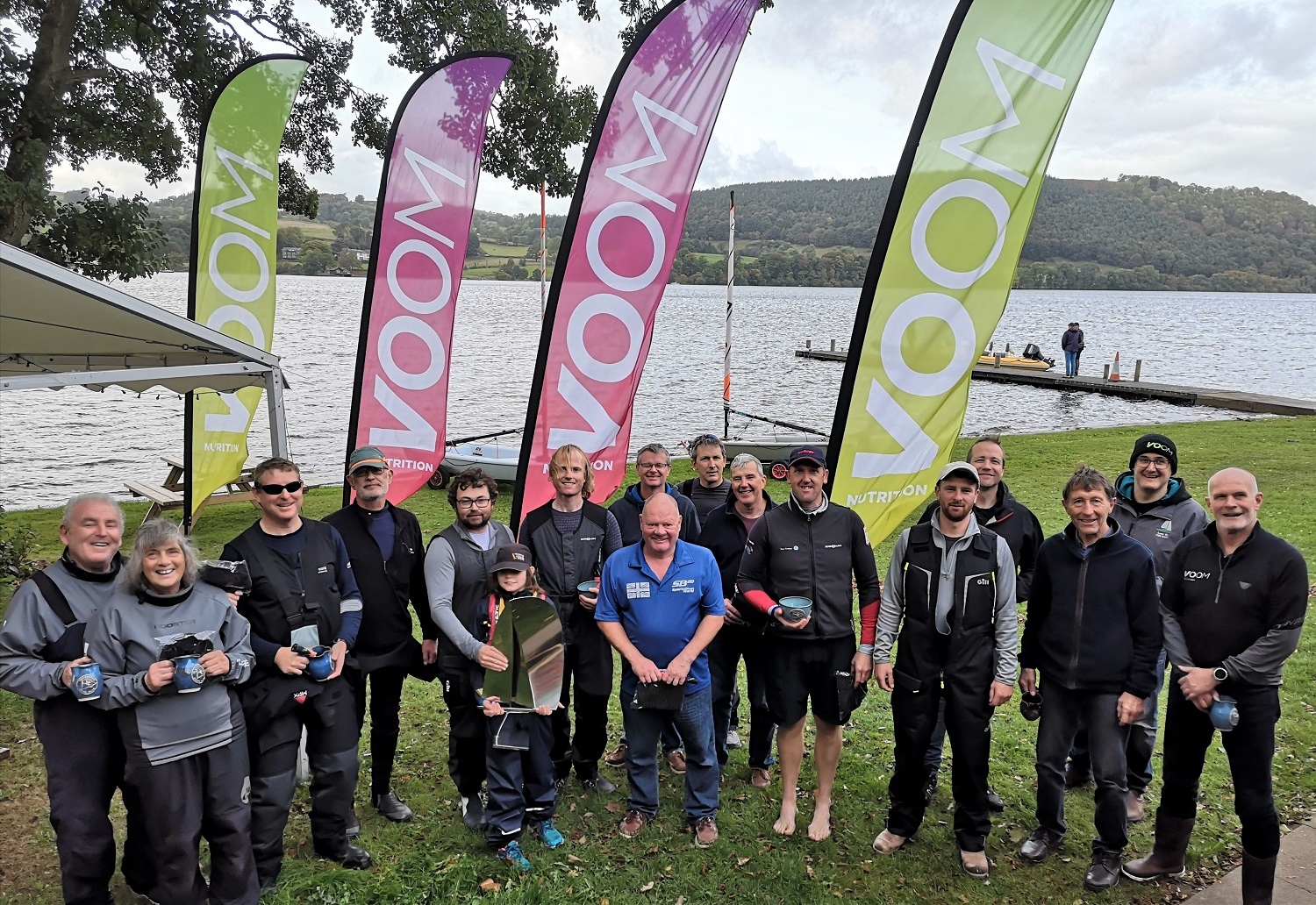 Forty-seven sailors in 21 boats competed in the VOOM Keelboat Weekend at Ullswater Yacht Club on October 9 and 10, enjoying six close windward/leeward races against the beautiful backdrop of the Lakeland fells.
UYC has a long tradition of keelboat racing and the event, sponsored by VOOM Sports Nutrition, was for Tempests, Flying Fifteens, VXOnes and SB20s.
The biggest fleet was the Tempest, the ex-Olympic boat which has been a class at UYC since the 1960s.There were seven boats and the Tempests gave a specially warm welcome to Derek Budden, an enthusiastic supporter of the class who drove the 660 mile round trip from Portsmouth to take part. Another Tempest traveller was Phil Munton from Carsington SC.
Also making a huge effort to attend were two Flying Fifteens from the Isle of Man Yacht Club. Michael and Helen Wilson and Jason and Debbie Corlett travelled around 130 miles to Ullswater, but that included the ferry journey of more than 60 miles. In the SB20 fleet, Andy Williams and his team made the long trip from Brancaster Staithe SC in Norfolk.
The racers were split into two starts - the VXOnes and SB20s, then the Tempests and Flying Fifteens. Saturday brought a fresh breeze from the SW and the plan was for three back-to-back windward/leeward races. The course was set round the corner from the clubhouse with the windward mark down the lake towards the narrows. There was enough breeze for the two-lap first race but the wind was unstable and fickle and was starting to really drop during the second race, making for some interesting mark-roundings at the final leeward mark with boats 'drifting around together'. Race officer for the weekend Jon Abbatt took the wise decision to abandon race three with the hope of running it the next day when more wind was forecast.
In every class the overnight leaders had two firsts VXOne, Tony Lewis & Andy Cutting, UYC; SB20, John Reekie and crew, Bassenthwaite SC; Tempest, Ian Modral-Gibbons & Mike Dakin, UYC; Flying Fifteen, Dave & Sue Giles, UYC.
Four more races on Sunday with five to count overall meant it was still all to race for. On Sunday the wind had increased but moved to the west making a windward/leeward course on the NW to SE lake difficult to set. John Abbatt took his committee boat North toward Pooley Bridge and set a course making full use of the width of the lake. The conditions were still gusty and shifty, leading to many place changes in the fleets and some exciting downwind legs.
Jono and Ben Shelley picked up their game with two firsts and two seconds to win the VXOne fleet. A Sunday surge by UYC's Josh Moran and James Lyons who got the other two firsts and a second put them in third place, Lewis/Cutting in second. In the other fleets the overnight leaders maintained their positions to win first places overall.
A big thank you to sponsors VOOM (www.voomnutrition.co.uk) and to all the volunteers who gave up their weekend to help run the event.
Prizewinners:
VXOne. 1. Jono & Ben Shelley, UYC, 8 points. 2. Tony Lewis & Andy Cutting, UYC, 13 points
SB20. 1. John Reekie, Andy Smith & Joe Roberts, Bassenthwaite SC 6 points
Tempest 1. Jon Modral-Gibbons & Mike Dakin, UYC, 6 points. 2. Ian Modral & Robin Higgens, UYC, 12 points
Flying Fifteen 1. Dave & Sue Giles, UYC, 5 points
- Sue Giles
Pictures below by Alison Bass