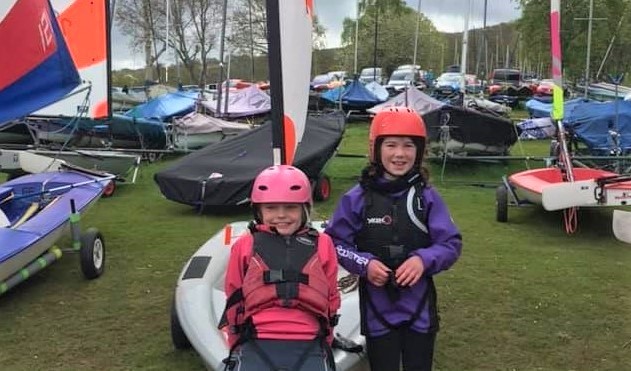 Ullswater Yacht Club pushed the boat out for its junior sailors last weekend (May 15 & 16) by clearing its usual racing programme for two days of training.
There was no club racing, just two full days of intensive training for the youngsters. After missing a year due to the pandemic, the annual junior training weekend was back with a total of 38 youngsters on the water. Thirteen of them were completely new to sailing and were taking the Royal Yachting Association's stage one course.
"It was great to be able to start up some of our youth training this weekend after having a year out last year," said UYC Sailing Manager Edmund Clarke.
"We had light winds over the weekend which was perfect for some of the youngsters who are just starting out. Thankfully the rain held off on Saturday but then we had some large downpours on Sunday afternoon.
"This did not stop our youngest stage one group taking to the water with water pistols with their ringleader, instructor Steve Potter as they went around attacking all the other groups!
"Thank you to everyone who helped over the weekend. It was great to see so many smiling faces and some level of normality after what has been a very long year."
Jane Warner, of Penrith, whose daughter Jessica took part, added: "A massive thank you to everyone who made the training weekend happen. We appreciate that a lot of hard work also goes on behind the scenes and in preparation. The smiles on the kids' faces was enough to show what a great success it was.
She also thanked the club members who gave up their racing weekend. "To all of the usual weekend racers - thank you for giving up your playground to the kids this weekend. They will soon be chasing you around those buoys."
Pix by Jane Warner
- Sue Giles