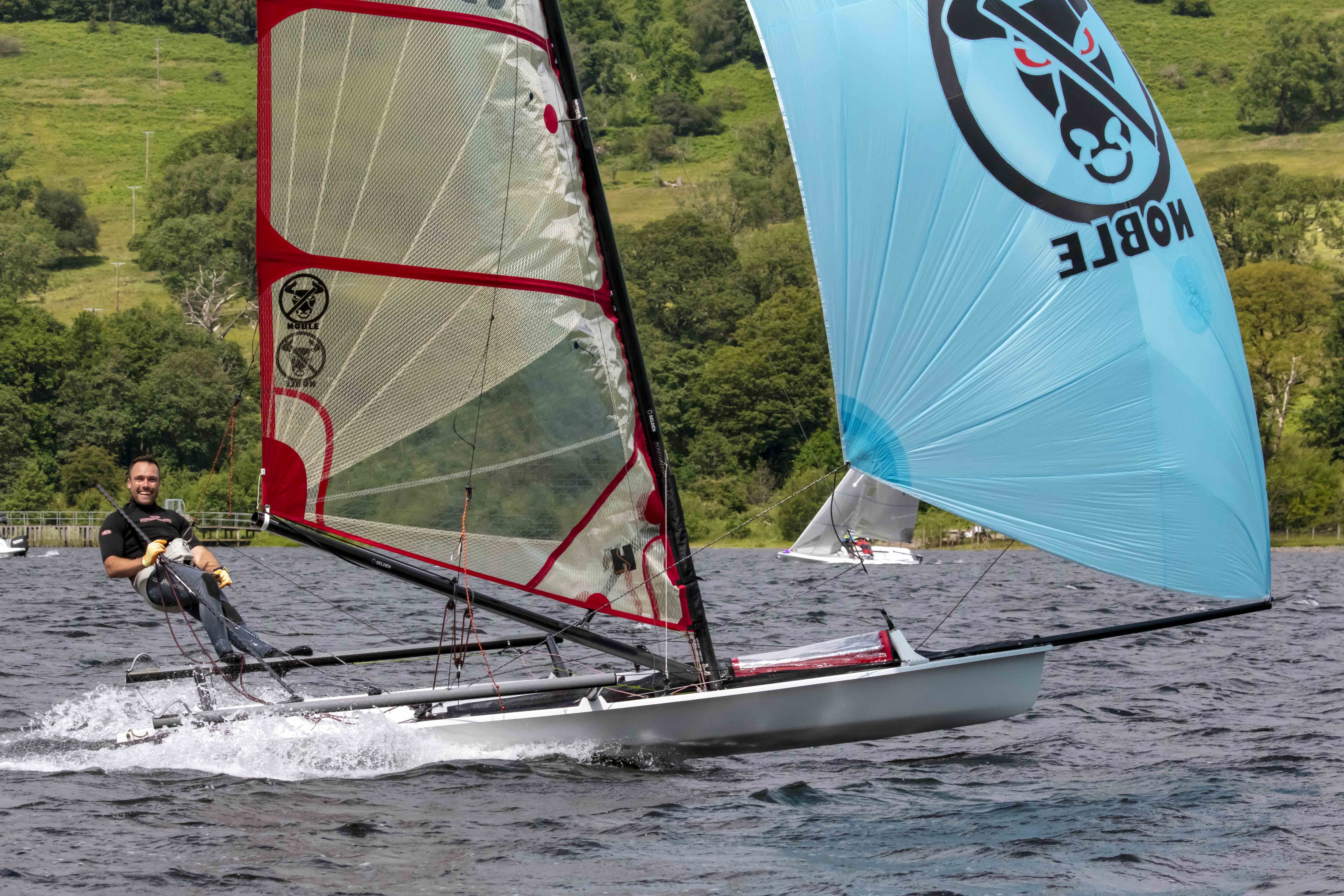 Musto Skiff sailor Dylan Noble won the 60th Lord Birkett Memorial Trophy at Ullswater Yacht Club on July 2 & 3.
It was a proud club success for Dylan who grew up at UYC and learned to sail there. He is the third generation of his family to win the sought-after silver salver. His dad Lester Noble is a record six times winner helming a 49er between 2004 and 2010 and his grandparents Ken and Innes Birks won in 1974 in an Albacore.
The iconic long distance event was established by the club in honour of Lord Norman Birkett who died in 1962, two days after making a successful speech in the House of Lords preventing Ullswater from becoming a reservoir which would have restricted public access. It has become more than just a race but a Festival of Sailing attracting entries in a wide range of different dinghies, keelboats and cruisers from all over the country.
After several years of weekend drifters, the weather gods smiled on us this year with good winds on both days, showcasing the beauty of sailing on the lake that the 'Saviour of Ullswater' fought for. The prevailing South Westerly wind on Saturday, created a perfect windward-leeward course the full length of Ullswater. Race officer Sean Brooks set a course for the 190 boats from a start line right across the lake, with a beat to Norfolk Island, then a run back to the club and the race got under way at the first attempt. The freshening wind and gusts of up to 20mph created a challenging seven-mile beat followed by an exciting downwind leg. First over the finishing line were UYC racers Matty and James Lyons in a 49er in just over 1 hour 13 minutes. That put them in 3rd place on handicap, beaten by two Musto Skiffs - Euan Hunter (1st) and Jamie Hilton (2nd) both of Dalgety Bay SC. The conditions were ideal for the Musto Skiffs with five boats in the top ten.
The forecast for Sunday was for lighter winds and a slight shift to the West. The start line from the club was angled further North but that still did not prevent two general recalls before a successful black flag start. In the lighter winds, the beat to Norfolk Island was tricky but Dylan Noble cracked it and was first Musto Skiff back to the club by almost four minutes. That put him in 1st place on handicap in the second race and with a 6th in the first race, he clinched the trophy. Second overall were Nathan Batchelor and Richard Anderton in a 505 from Tynemouth/Chichester YC with a 4th and a 7th and third were Phil Hardisty, Chris Hill and Pete Richardson in a National 18 from Isle of Man YC (7th & 6th).
The weekend's main sponsors were Waitings, the civil engineering contractors and plant hire experts based near Penrith. Also supporting the event were Ullswater Steamers, Dalemain Estates and Hire & Supplies of Dumfries.
And the club was delighted to welcome Lord Norman Birkett's granddaughter Victoria Cliff Hodges as a special guest. Victoria was among the passengers on the special three-hour Birkett Cruise organised by Ullswater Steamers on Saturday, July 2. The steamer Western Belle stood off near the start line so that family and friends of the racers could experience the drama of the mass start, then followed the fleet down the lake.
The club thanks all the volunteers who worked so hard to make the 60th Birkett possible. And a huge thank you goes to every sailor who took part in the racing - you all make the Birkett such an amazing event.

The full results are on the Birkett website:
https://www.ullswaterycbirkett.org/new-page-1 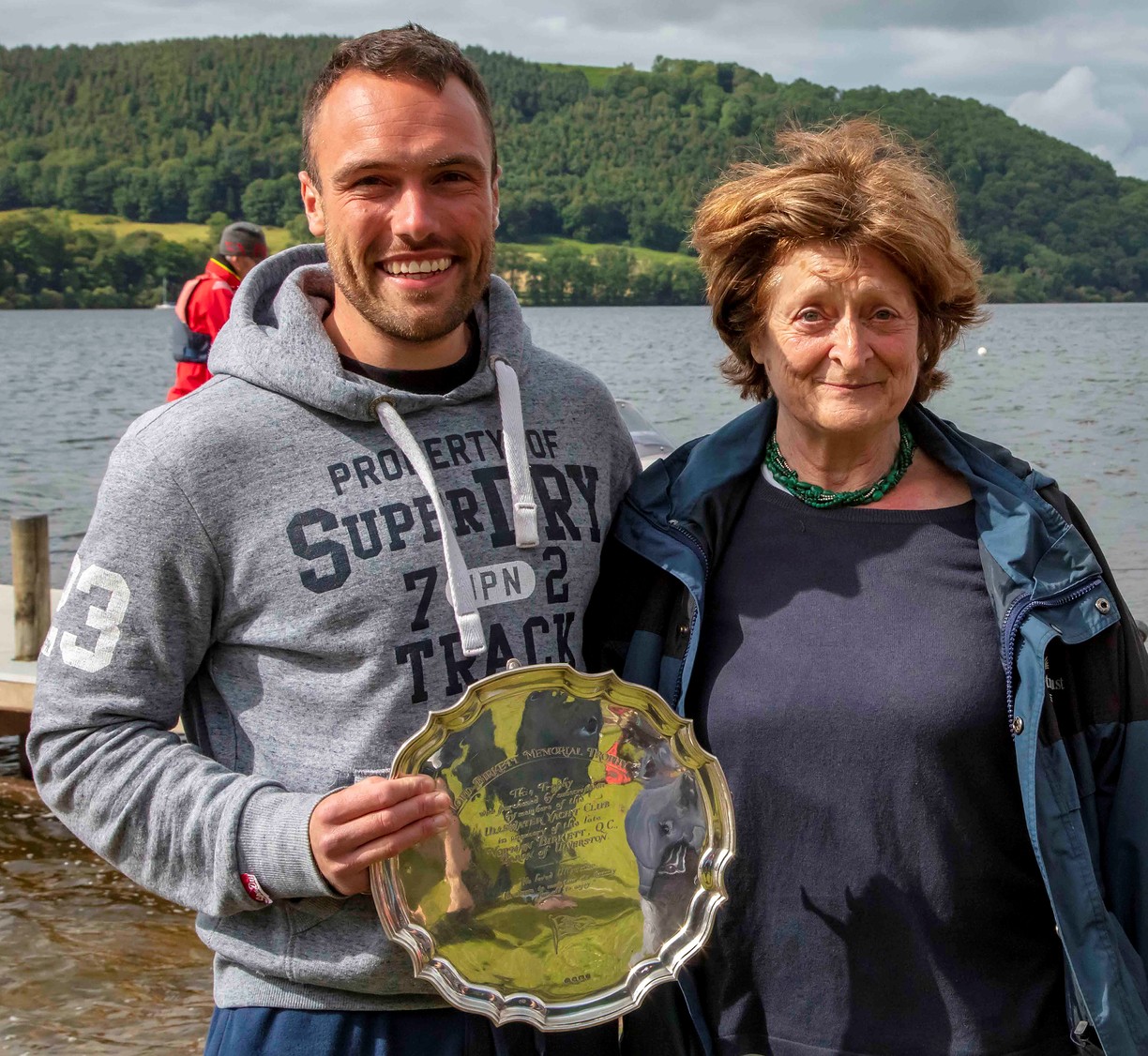