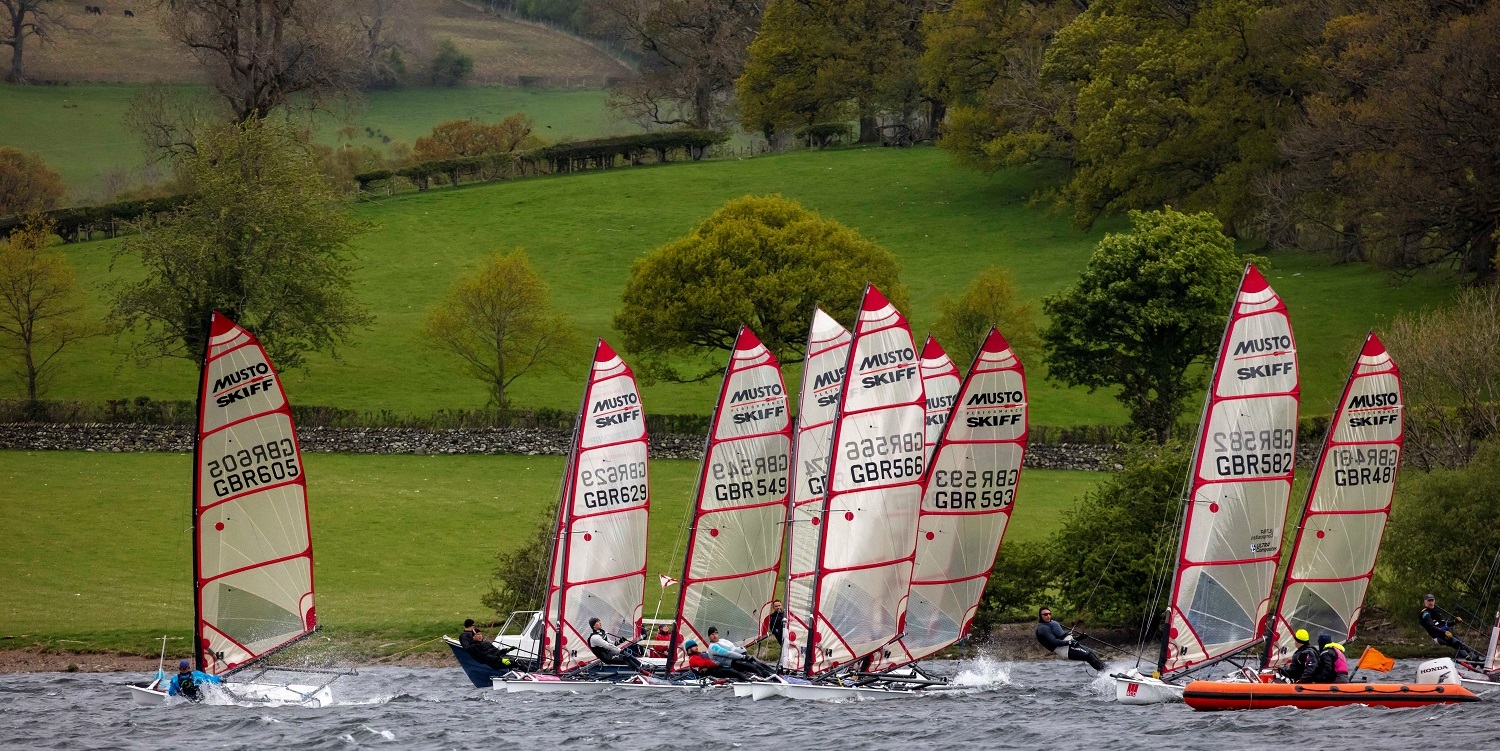 Ullswater Yacht Club's annual Daffodil Regatta was held on May 22 & 23 and to welcome visiting racers back - it was the club's first open since 2019 - the lake weather gods threw just about everything they could at them from sun and flat calm to heavy rain and winds gusting well over 30 mph.
The popular event is usually held at the start of the season, but was delayed this year because of Covid and it was fully booked within days by racers desperate to get back to some top competition.
For the biggest fleet, the Musto Skiffs with 27 entries, it was a Scottish and Northerns Travellers event. The foiling Waszps had 25 entries, many of them racers new to UYC events keen to see what Ullswater has to offer, and there was also a good turnout of VXOnes with 10 entries. These three fleets sailed on an windward/leeward series with race officer Jon Abbatt.
The other three fleets, fast and slow handicap and cruisers, a total of 26 entries, sailed a conventional series of courses run by race office Craig Robinson, assisted by the rest of the Robinson family Craig's wife Hannah and his parents Sheila and John. Craig and Hannah's daughter Eleanor, not yet two, was also there on the cruiser committee boat lending a hand!
Saturday brought a disappointing forecast of dropping, fluctuating winds. The asymmetrics/foilers' course was round the corner from the clubhouse with the windward mark changing from north to south in the fickle conditions. They had the advantage of the stunning views down to Helvellyn but it was hardly asymmetric or foiling conditions. The Skiffs and VXOnes got away cleanly for race one heading slowly north to the windward mark. But for the naughty Waszps there was a general recall and by then the wind had dropped so much that a start was not possible, The Skiffs and VXOnes drifted round one lap to complete the race, then they all called it a day. The winners were Skiffs, Ben Schooling and VXOnes, David Clarke & Artur Dembinski. Typical Ullswater, by the early evening the wind arrived and the Waszps got a taste of what the lake can offer to foiling boats.
The conventional fleet had a start at the Pooley Bridge end of the lake and they managed (slowly) to complete more races, three for the fast and slow handicap and a long distance race for the cruisers. Overnight, counting three races, John Hepworth in a Laser was in the lead of the slow handicap fleet, Graham Donkin & David Lyons in a Tempest won all three races in the fast handicap and David Thomson & Neil Sayer in a Hunter Europe won the cruiser race.
So it was all to race for on Sunday with a plan to sail four races on the windward/leeward course to make up for the loss of races on Saturday, and a forecast of strong southerly winds with gusts of over 30mph and rain. And the forecast was not wrong. On the windward leeward course, the downwind mark, was in line with a particularly strong black band of wind from the south, leading to many intersting gybes, keeping the safety crews busy. After race three, as the white horses got bigger, the race officer decided to call it a day with three races to count out of four. UYC member Jono Shelley showed his mastery of challenging conditions on the lake by winning all three Skiff races. As did Andrew Crouch and his crew in a VXOne, also winning all three races and Matt Beck in his Waszp scored a 1,1,2. These three boats were the overall fleet winners.
In the cruiser fleet on Sunday, Thomson/Sayer in the Hunter were second on handicap in the long distance race to take the overall prize. Two seconds in the fast handicap races were enough for Donkin/Lyons in a Tempest to win and in the slow handficap fleet, Charlie Chandler in a Phantom won all three races to take the overall prize.
Huge thanks go to all the UYC volunteers who gave up their weekend to make the event such a success. The club is now looking forward its biggest event of the year, the Lord Birkett Memorial Trophy on July 3 & 4.
Full results are on the UYC website under the Race Results heading.
Daffodil Regatta winners:
Musto Skiff. 1. Jono Shelley, UYC
2. Ben Schooling, Datchet Water SC
3. Danny Boatman, Sunderland YC
VXOne. 1. Andrew Couch & crew
2. Keith Lockey, Paul Adams & Anne Noble, UYC
3. Lester Noble & Mark Simpson, UYC
Waszp. 1. Matt Beck
2. Jamie Calder
3. Zachary Blomeley
Fast Handicap 1. Graham Donkin & David Lyons, Tempest, UYC
2. Mike Matthews & crew, SB20
3. Stuart Keegan, RS800
Slow Handicap 1. Charlie Chandler, Phantom
2. John Hepworth, Laser, UYC
3. Martin Smith & crew, RS200
Cruiser 1. David Thomson & Neil Sayer, Hunter, UYC
2. Colin Brown & Neil Thompson, Beneteau 21, UYC
Top: Skiffs in action by Tim Olin
Below: Our youngest volunteer Eleanor Robinson takes a break on the conventional course race boat. She was on the boat all weekend helping her parents Craig and Hannah and grandparents John and Sheila run the racing.
- Sue Giles 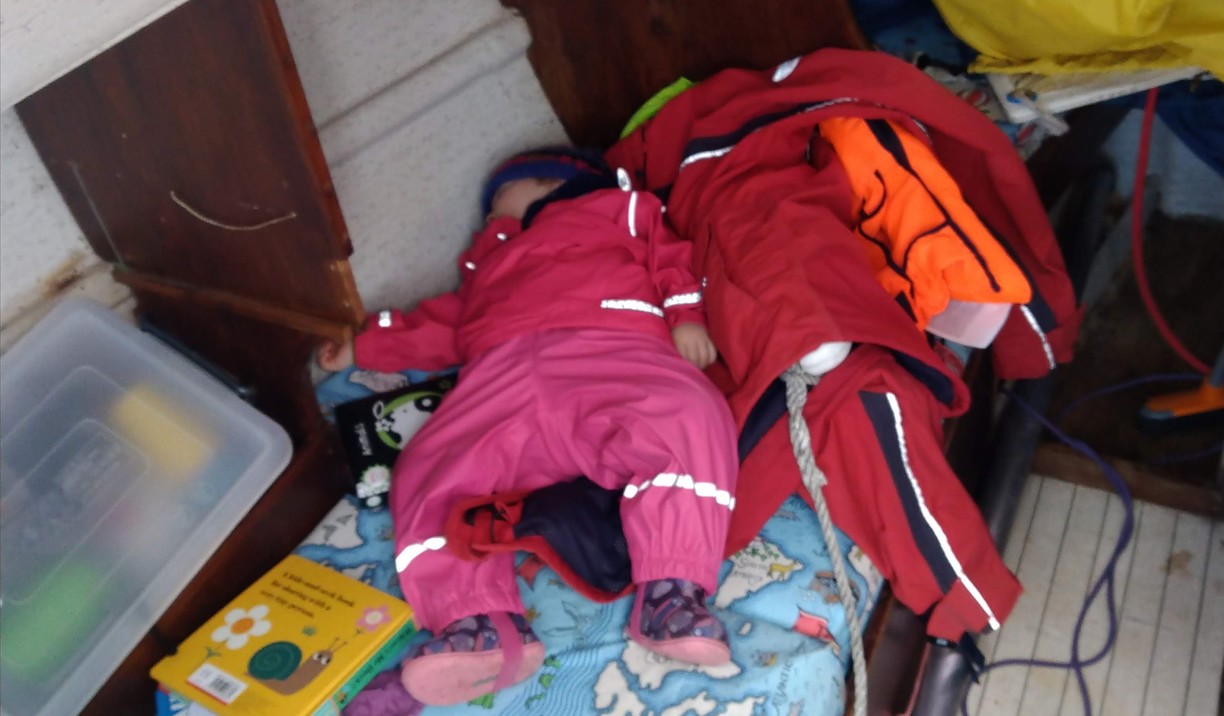