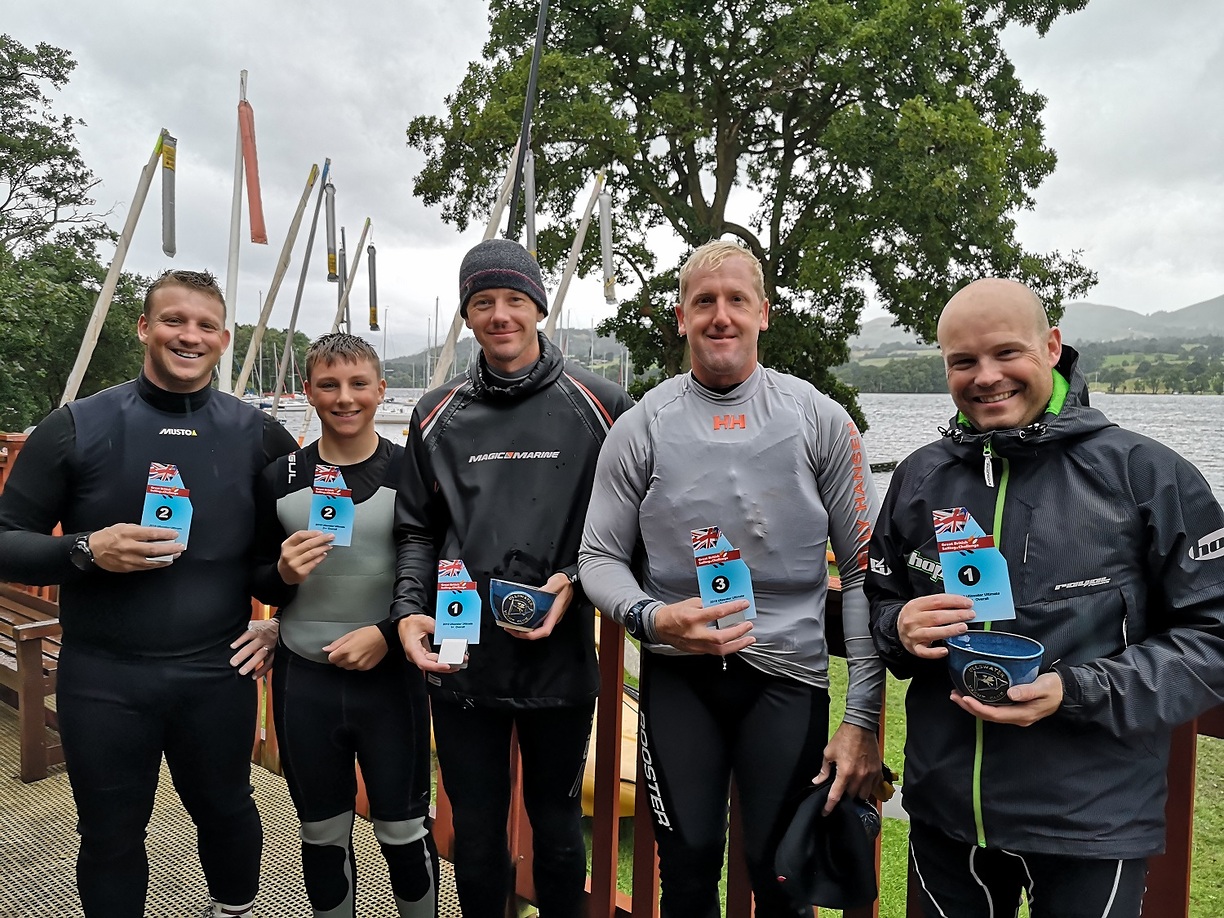 Ullswater Yacht Club's 'ultimate' racing weekend on August 17 and 18, the last qualifying event in the Great British Challenge series, was a wild and windy success.

The first ever Ullswater Ultimate had an entry of 34 boats from all over the country and the competitors enjoyed six challenging and exciting races over the two days in which the wind blew constantly with gusts of more than 25mph.The Ultimate attracted a wide range of different classes from Lasers and asymmetrics to Flying Fifteens and cruisers, racing with average lap times using the Great Lakes Handicap system. The club was also pleased to welcome two Challengers dinghies from Rutland SC to the event. They completed all the races on both days, a great showcase for the class's stability and performance.

To give everyone more of a chance, race officer David Clarke set three different courses for the three races on Saturday and Sunday, a trapezoid, a triangle and windward/leeward. There were five different race winners and several boats in contention for the overall prize right up to the final race.

Race one was on a trapezoid course with the start line near the North end of the lake. In the South Westerly wind, the windward leg was straight down the lake and the second mark was in front of the clubhouse giving spectators a great view of the action. Matty and James Lyons of UYC in a 49er took an early lead and did three laps while the rest of the fleet completed two. The winners on handicap were Chris Pickles and Matt Sharman of Bassenthwaite SC in an RS400, Richard and Bradley Green, also in an RS400, from Yorkshire Dales SC were second.

With a fixed start/finish line, the racers were pleased with the quick turnaround as the wind kept up with some vicious gusts. This time it was the triangular course, the race again lasting around 30 minutes, and the fastest boats completed three laps, with the rest of the fleet finishing at two. Winner of race two was Jono Shelley of UYC in a Musto Skiff and again the father and son Green team in an RS400 were second. After a break for lunch, the final race of the day was a windward/leeward course and the Lyons's 49er came into its own, completing four laps of the course and winning on handicap.

Overnight Pickles/Sharman were in the lead, with a 1,2,3 but it was still all to sail for on Sunday which brought more of the same wind from the same direction with the same white horses but this time accompanied by rain, rain, rain. A slightly smaller fleet set off on the trapezoid course for race four as breakages and fatigue took their toll. The winner of race four was Jono Shelley with second place taken by another team in the mix, Tim Whitehead and Joe Pester of UYC in a 3000.

The 3000 was again up there in race five, the triangle, taking first place on handicap and Josh Moran of UYC in a Musto Skiff was second. Coming into the final deciding race of the event, the wind eased slightly and became more shifty. The winner of the windward/leeward course was Jono Shelley and second was Graham Hall of Rutland SC in a Challenger. But a fourth place in the final race and consistency all weekend, they were never lower than fourth, won Pickles/Sharman in their RS400 the overall event. Richard and Bradley Green, newcomers to the RS400, were second overall and Jono Shelley in a Musto Skiff, was third.

The inaugural Ullswater Ultimate was a great success thanks to the wind gods providing strong South Westerlies all weekend but also to a huge team of volunteers from UYC who gave up their weekend's sailing to make it happen.

The next event in the Great British Sailing Challenge is the Grand Final at Rutland Sailing Club on 28 & 29 September. Chris Pickles/ Matt Sharman's victory at the Ullswater Ultimate earns them an invite along with other qualifiers from the season. There will also be a number of Wild Card entries who will be invited to compete in the Final of the inaugural GBSC season.

Full results from the Ullswater Ultimate are here: