The 21st Anniversary Masters Week sailing competition was held from Monday, July 12. Although there were spits of occasional rain on Monday, the rest of the week was all most sailors could hope for, a reasonable amount of wind to keep moving and plenty of sunshine. It was a great opportunity for regular attenders to meet old friends and make new ones. There were 13 entries for the week and Colin Brown was the race officer.
The races are organised according to the Club's POETS rules and guidance. For more information, interested Readers can see details of these on the UYC website.
Race 1: The weather for the week had been forecast as settled fine and although there were spits of occasional rain, Monday started well. Colin set a conservative course, Club-Waterside-Harbour-Brunskill-Club (3 laps) and eleven boats competed. There was a fine tacking match between David Hansford and Derek Pierce in their Pegasus and Mike Egan and Keith McDermott in an Etap as the race progressed, whilst John Easterby and Richard Sealby also in a Pegasus did much the same with competitors further down the course. After handicap calculations these three boats finished in that order within 40 seconds of each other in a race which lasted some 90 minutes.
Race 2: 12 boats started. The course was Club-Lodge-Brunskill-Bonscale-Thwaite-Bonscale- Club 2 laps. There was an awkward start as the best place was by the starting pin on port tack. Colin Brown got there first and maintained this lead throughout the race. The wind was patchy and halfway round the first lap the fleet had split into two groups. The back markers were so far behind that the race was shortened to one lap. As usual the wind filled in and the back boats then had a fine sail in company to the finish. Results 1: Keith Hyde and Steven Jury (Parker 21) 2: Colin Brown and Neil Thompson (Beneteau) 3: Mike Egan and Keith McDermott (Etap).
Race 3: The day started with the promise of a wonderful sailing day - 10 knots of breeze, some wind holes to catch out the inattentive and plenty of sunshine. The course was Club-Brunskill-Ravencragg-Halsteads-Club, 3 laps in lieu of a full island race. David Hansford and Derek Pierce got away towards the front and kept up with Mike Egan and Keith McDermott even when the latter (who were later heavily penalised on handicap for this) flew a spinnaker; in doing so they had a couple of spectacular broaches which greatly entertained the rest of the fleet. Parry Coates and crew were also well in contention throughout. David Hansford and Derek Pierce were fastest on the water but after handicap calculations the results were 1 Parry Coates, 2 Raymond Harle and John Wales (Hunter) 3 David Hansford (Pegasus).
Race 4: Everyone enjoyed delightful day weather wise. The course was Club-Floshgate-Brunskill-Club, 3 laps. By now it was becoming obvious which were the leading boats for the week and they got away first and the rest of the fleet played follow my leader. Results: 1 Mike Egan and Keith McDermott, 2 Keith Hyde and Steven Jury, 3 Colin Brown and Neil Thompson.
Race 5: At the end of the fourth race it was possible for any one of five boats to win the series, counting their best three results. The final race was a pursuit race, the slowest boat for the week, i.e. that with the lowest accumulated handicap, started first and the rest followed at predetermined timed intervals, the boat with the highest handicap starting last. The race lasted 100 minutes and positions were recorded at that point. The course was Club-Lodge-Waterside-Beauthorn-Ravencragg-Club. David Hansford and Derek Pierce started last but by the first mark had passed most of the fleet by following a windier route and by Ravencragg first time around were in front by a large margin. Results: 1 David Hansford 2 Colin Brown 3 Keith Hyde.
The Masters Series dinner and prizegiving took place following the last race. Organiser John Easterby thanked Helen Harle, Denise Cheetham and Moira Wales in particular for assisting with the afternoon post race refreshments, which had been donated by the competitors and Moira for preparing the evening supper. John presented them with bouquets on behalf of he competitors. He also praised Colin Brown for organising the racing for the week, a difficult task at best with the changing wind conditions. Thanks were also given by the group to John for organising everything else including the timely preparation of the race results with his usual efficiency.
Race winners for each day received a certificate. The series overall results were extremely close: 1 David Hansford and Derek Pierce, 5 points, 2 Keith Hyde and Steven Jury, 6 points 3 Mike Egan and Keith McDermott, 7 points.
- David Hansford

Pictures: The competitors and friends enjoying the evening sunshine after the prizegiving
Winner David Hansford receives the trophy from race officer Colin Brown
The fleet before the final race 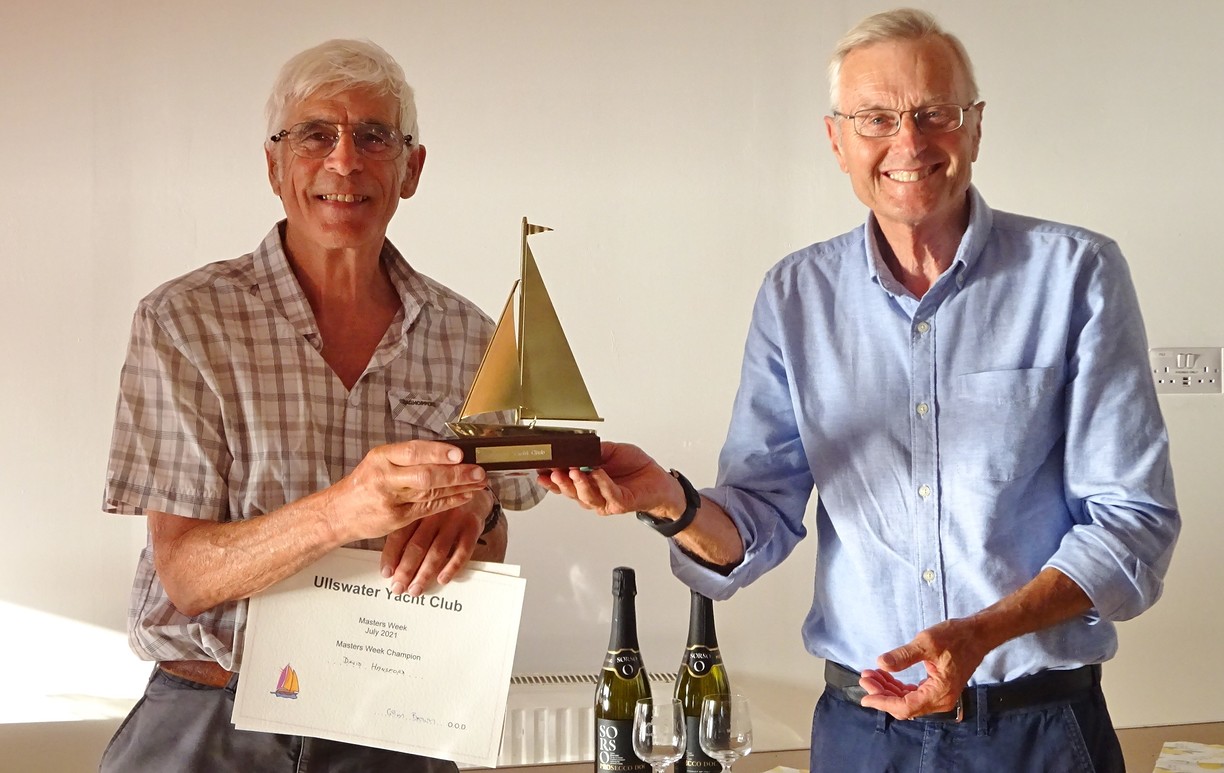