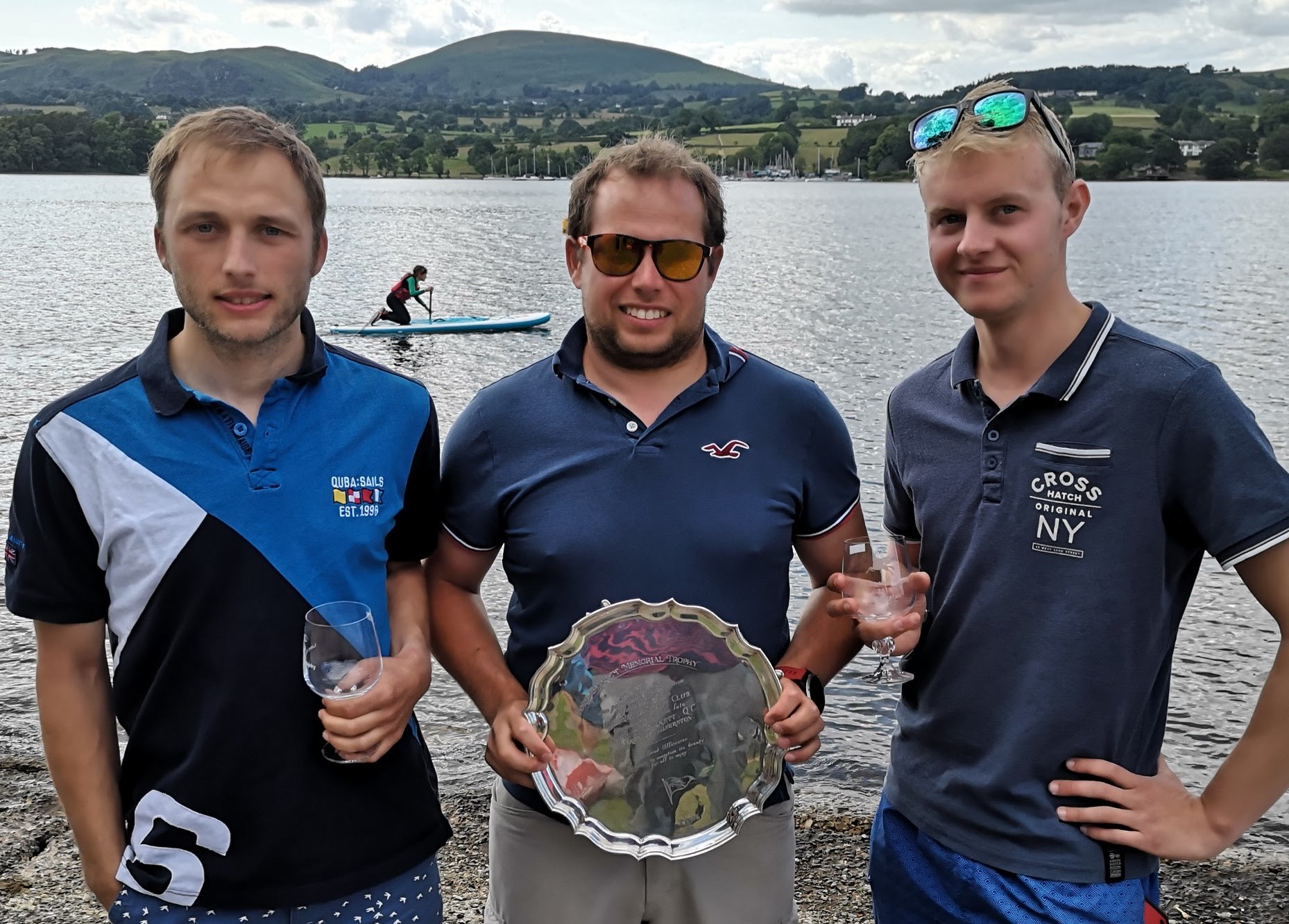 It was the first time the team from the club near Derby had entered the event and for the first time there will be three names on the sought-after silver salver a three-person dinghy has never won since the Birkett was established in 1963.

The weekend was dominated by very light, unstable winds and frustrating sailing conditions for the 230 boats taking part but the trio managed to stay ahead in the results, winning overall with two firsts on handicap. As well as the trophy, they also won a voucher for bed and breakfast for two at the luxury Sharrow Bay Hotel, UYC's next door neighbour. In second place were Colin and Oly Murray in a Norfolk Punt with two thirds and third overall were 2014 Birkett winners Chris Pickles and Matt Sharman of Bassenthwaite SC in an RS400.

There was very little wind on Saturday and it was coming from an awkward NNW direction. Race officer Rick Boyce set a course from a start line right across the lake to the northern end, round two buoys, then south to Wall Holm, the second of the three islands at the Glenridding end. The fleet got way at the second attempt under the black flag and made very slow progress to the north. Then it was off on a downwind leg of more than seven miles to Wall Holm and a beat back to the club.

Passengers on the special Birkett Cruise on the Ullswater 'Steamer' Western Belle had a close-up view of the racers as it stood off near the start line and followed the fleet down the lake.

Dave and Charlie Chandler of UYC in a VXOne took line honours, finishing in just less than 3hrs 30mins with the Murrays in a Norfolk Punt next. But the National 18 was far enough ahead to win on handicap and last year's winners, Dave Exley and Nigel Hall of Leigh and Lowton SC in an RS400 were second on handicap. The extremely light winds persisted into the early evening and many of the racers made very slow progress - 30 boats did not manage to cross the finishing line before the six hour time limit.

Sunday brought the same challenging, vaguely Northerly, conditions and the start line was set round the corner from club near Sharrow Bay. It was a shorter course than on Saturday, a 'beat' to the north round two buoys near the club, a 'run' down the lake to a turning mark on the second reach near Birkett Crag, then back.

The leading boats took less than two hours to complete the course with the National 18 again far enough ahead to win on handicap. Grahame Newton and Rachel Rhodes of Staunton Harold SC sailed a blinder in their Scorpion. They were up there with the faster boats all the way round and finished second on handicap.

It was a successful weekend for Staunton Harold SC with 11 entries the club also won the Dalemain Trophy for the most visiting competitors. And a special prize was awarded to 13-year-old Cameron Blamey of Isle of Man Yacht Club for his achievement in completing both races helming an RS400.

The iconic event was first raced in 1963 in honour of Lord Norman Birkett who died two days after making a successful speech in the House of Lords which prevented Ullswater from becoming a reservoir which would have restricted public access. Every year since then, the club has held the prestigious two-day long distance race in memory of the 'Saviour of Ullswater.'

The racing may have been frustrating but the competitors could not fail to notice the views of the stunning Lakeland scenery from the water which Lord Birkett fought to save for us all to enjoy. This year the club was delighted to again welcome Lord Norman Birkett's granddaughter, Victoria Cliff Hodges, who watched the racing on Saturday. The event, which attracts competitors from all over the country, is more than just a race. It has become a Festival of Sailing and a Celebration of Ullswater, with camping on site, live entertainment and food all weekend.

Ullswater Yacht Club would like to thank everyone who helped make up the fleet of safety boats necessary for the event, some with crews, including Seaham Divers & friends and Northern Exposure Rescue. We would also like to thank Ovington Boats for hull stickers and Sharrow Bay Hotel and Ullswater Steamers for their support.

And huge thanks to Birkett race officer Rick Boyce, and his race box team, Birkett co-ordinator Andrew Bailey and his site team, Edmund Clarke and his safety team, the Robinson family and their marquee team, the hospitality team, Annie Thomson and her tea room team, and all the other many volunteer members of UYC, without them the event would not be possible.