How I came to sail on Ullswater by Liz Amos 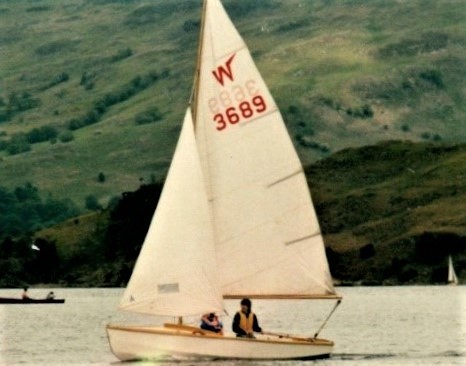 At the age of 11 I discovered Arthur Ransome's Swallows and Amazons and decided, without ever having set foot in a sailing dinghy, that sailing was my sport and I would do anything to learn. After a few years of endless daydreaming and poring over books, one entitled (much to my disgust) Sailing for Boys, my parents sent me on a course at Emsworth Sailing School, run by 'Crab' Searle (does anyone remember him?). A couple of years later my mother bought us teenagers a Heron dinghy, which we sailed on the sea at Hythe (Kent). It was either blowing a gale and we were upside down in the water, or flat calm and we weren't going anywhere.

At this point young romance intervened, when Charles, a keen skier came on the scene. We agreed to learn each others' sport, so I learnt to ski pretty quickly and somehow sailing was put to one side. Marriage, being a farmer's wife and three children came next, but once the children could all swim we thought about sailing again. This time it was a Wayfarer on a gravel pit near Canterbury great fun for the adults but not always enjoyed by the youngsters unless we invited a few of their friends and took a 'shore-minder' with us.

Then came our first visit to Ullswater. Some friends living in Northern Ireland had the use of a boat on the lake and said 'Why don't you meet us with your boat for a holiday?' We towed the Wayfarer to Cumbria, via Somerset (can't think why we did that), and stayed at Land Ends, sailing from The Spit at Glenridding with Tony Longworth. Later, when we bought a holiday cottage at Keld, the Wayfarer stayed in Cumbria and was sailed by us whenever we could get away from Kent. We also ventured into the Mediterranean on the first of many flotilla sailing holidays. After the Wayfarer was sold we were without a boat until we came to live permanently in Cumbria.

A visit to the same friends, now living in Italy overlooking Lake Maggiore where their cruiser was moored, convinced us we should get back to sailing. A quick visit to Ullswater Yacht Club was made and before you could blink Bill Powton had arranged for us to buy Terry Fisher's 'bumble bee'. We sailed her from Sharrow Bay, mostly down the lake where we couldn't be seen making idiots of ourselves, for a couple of years until we felt brave enough to join Poets, where we trailed happily along in last place.

The following spring, after an outing in Alan Thomson's new Etap (sail number 273 and still in the Club), the skipper decided we must have one. The offspring were persuaded that some of their inheritance should be spent on a 30 th wedding anniversary present, and Dilemma, so named because we didn't know whether we should spend all that money and then when we had, we couldn't think what to call her, was launched in 1999.

When Charles died in 2006 I was determined to carry on sailing, and became Dilemma's skipper. Benson Adams came to crew for me in Poets we started every race fuelled by one of his extra strong mints and when Harry came on the scene we taught him to sail.

The highlights of my sailing career? Bob Noble telling me he'd heard that I had been hiding my sailing light under a bushel, and coming 2 nd in a Ladies Race.

Harry adds: When I first met Liz she asked me if I would like to learn to sail? An enthusiastic yes from me. Then I asked her if she would like to learn to play golf? A very emphatic no from her. So we're both happy. Now that she's bought an electric motor for Dilemma I am hoping she will buy me one for the tender.

Pictured: Liz sailing the Wayfarer off Glenridding, with daughter Becky crewing, in 1983. Liz sailing in 1983. Dilemma sailing in the 50th Birkett, Harry on the helm with Liz in charge of the gennaker (doing what it should for once!) 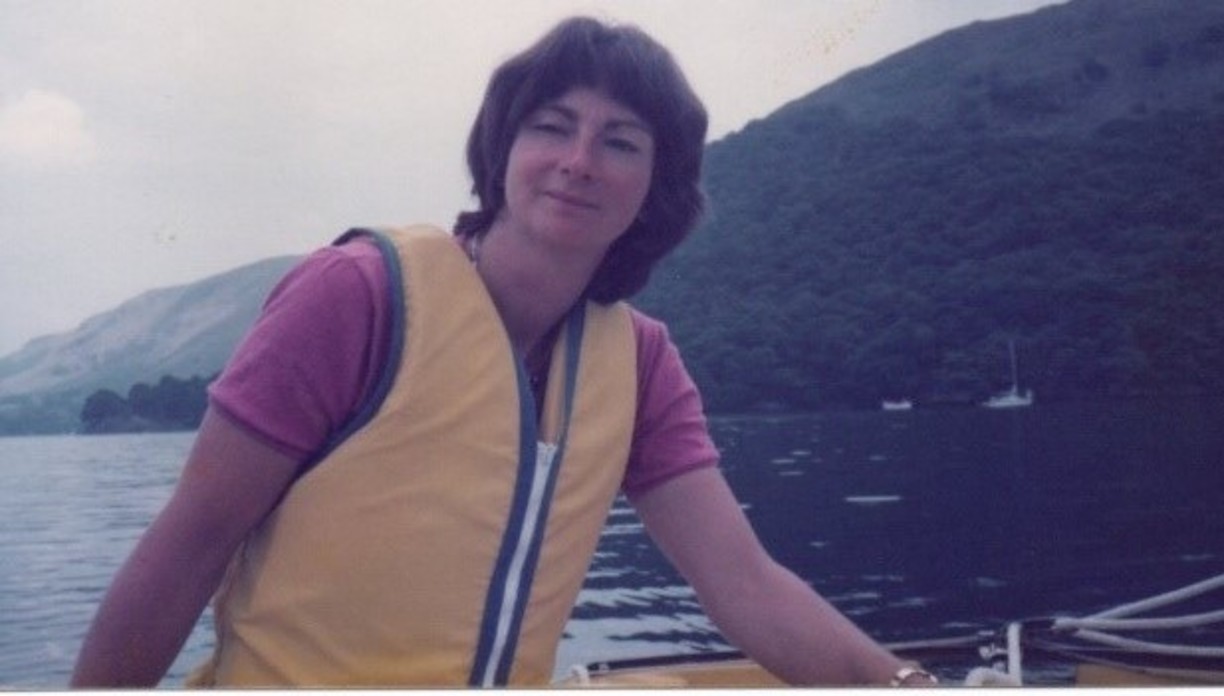 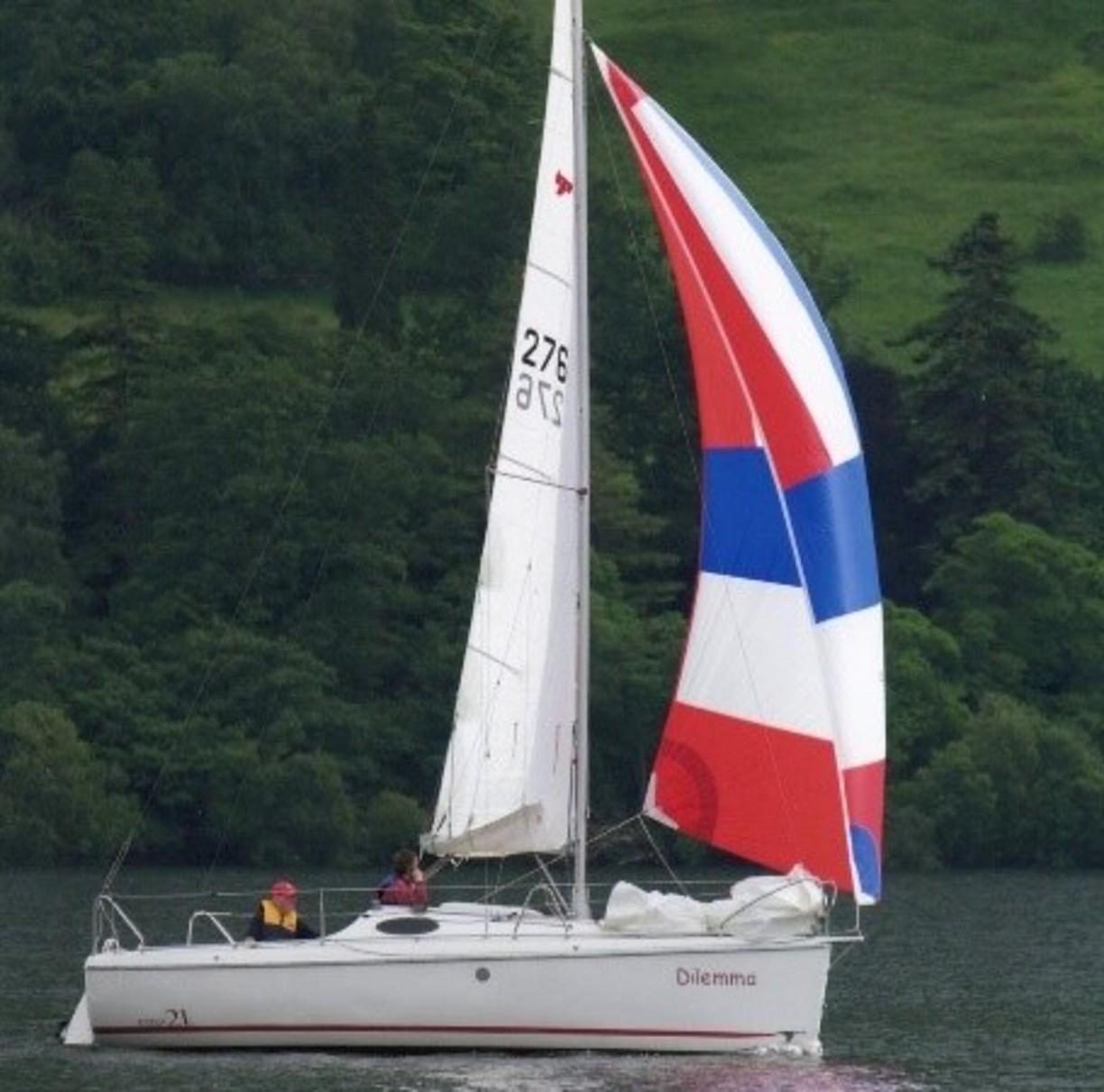