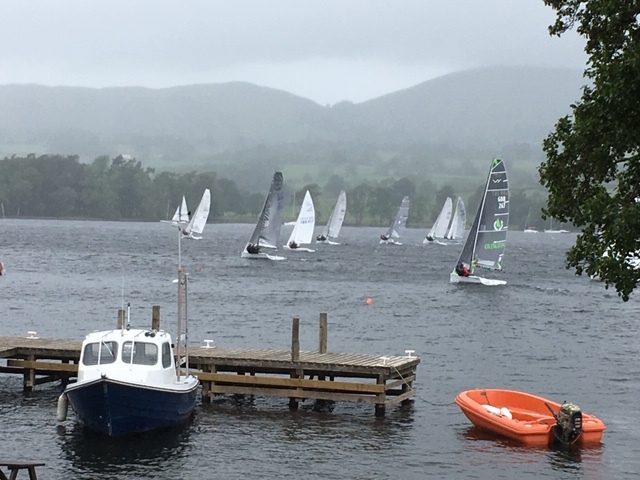 Members of Ullswater Yacht Club celebrated the 60th anniversary of their oldest trophy race with an exciting afternoon on the water in very high winds on Sunday, June 2.

The Island Race was first sailed in 1959 and the long distance event has been held every year since then. The club had been founded the year before and the idea of sailing the full length of the lake, around an island at the other end and back captured the imagination of the enthusiastic members of the new club.

It is still one of the most popular closed events on the club calendar and despite strong winds with even stronger gusts of more than 30mph and a forecast for heavy rain on Sunday, a total of 22 boats, 18 dinghies/keelboats and 4 cruisers, signed up to take part, racing against each other on handicap.

There was a great turnout for the VXOnes, the biggest class, with 7 in the race and the course was set to Cherry Holm, the most southerly of the three islands at Glenridding. The SSW wind created a giant windward/leeward course for the competitors and as the wind increased several sailors decided to call it a day and to head back to the safety of the club foreshore.

First round Cherry Holm was Graham Priestley in his foiling singlehander the Waszp. The strength of the wind gave him ideal conditions for sailing above the water, but the gusts also led to lots of swimming after capsizes. He made it back to the club in 1hour 37 minutes with the next boat, a VXOne helmed by David Clarke and crewed by Edmund Clarke and Rick Boyce ten minutes behind. The VXOne's time was still good enough for the Clarke team to win The Island Race Trophy on handicap.

A total of 12 dinghies/keelboats made it back to the club to get a result after a memorable sail. In the cruiser fleet, the Kite, sailed by Brian Moreton and Brian Bell, was 'last boat sailing' – the only one to complete the course.

The trophy will be presented at the club's annual prizegiving in October. It was donated in 1959 by founder member Selwyn Kirwood who specified that the course should be to the furthest island. The trophy was won for the first time on August 15, 1959, by Alec Snaith in an Albacore.

It became a popular annual race and when the club decided to hold an event in memory of Lord Birkett, a long distance island race was the obvious choice. The Lord Birkett Memorial Trophy, an iconic event which attracts competitors from all over the country, was first sailed in 1963. This year's Birkett is on July 6 & 7.