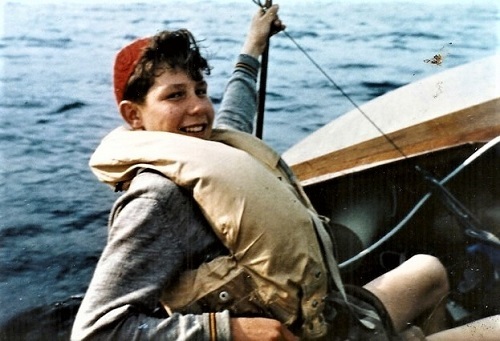 A wild plane in the Albacore across Sharrow Bay the gybe at the mark, then a gust, the boat accelerated in a wall of white water and the two teenage girl crew ended in a heap pinning me to the aft deck my sixteen-year-old self on cloud nine!

My name is Walter (Wally) Riley and I joined UYC at the age of 13 in 1960 with my dad, Frank Riley, my mum Grace Riley and sisters Paddy and Margot. Wally is pictured aged 14 - yes it is his school jumper.

We sailed Albacore 562, Fiesta she was a Fairey Marine hot moulded boat, and my dad had a special aft deck fitted with convex curve at the front, and concave at the stern to allow the tiller to go through the transom. The purpose was to enable a mainsheet track to be fitted. The galvanised steel jib halyard passed under the foredeck and up the forestay there was a ratchet set across the underside of the foredeck to enable the halyard to be tensioned with a sideways pull on a 'barber hauler'. The metal centre plate was raised and lowered on a set of pulleys this was soon replaced with a wooden board.

Clothing was primitive my dad bought me a Navy surplus anorak heavy outer canvas with lining I ended up in the water on countless occasions, the only comfort being the huge Mae West life jacket that I always had fully inflated. On one early capsize my dad ended up under the sail and was panicking while I floated helpless, not knowing what to do. He got from under the main, only to come up under the jib and continued to shout and gasp in the water he finally surfaced to my relief. He smoked Capstan cigarettes, and during one capsize close to Eusemere, where cars pulled up to watch, he sat on the hull, took out his fags and calmly lit up. My dad was known as Frank Up-side-down Riley.

The people in the club in that period were very influential in shaping my life and during my conversations with my father shortly before his death we agreed that they were golden days. We drove across the Pennines from Bishop Auckland every Sunday morning during the season and back in the evening sometimes calling at a pub in Bowes for a drink to chat to other members (Jack Hartnell) about the day's sport. We always arrived at UYC in time for the Sunday morning All Class Handicap known as an 'All Class Alec' after Alec Snaith. Alec was one of the main movers in the club and used to sail his Albacore from his caravan, sited near Howtown, to take part in the club racing. His wife Norah would arrive by road with their dog.

Brian and Effie Heath were regular OODs. Brian was full of sailing stories, particularly about 10 Square Meter Canoes sailing in Force 7s at Hayling Island. His son John owned one, and I remember sailing it with his sister Midge on the front and Audrey Jackson on the stern. John's twin brother Michael occasionally sailed with him in their Albacore, but it wasn't a firm or lasting partnership. The people I can remember in the Albacore fleet were, Leonard Carma, wife Joyce and daughters Buffy and Anne, Mike Ferens, wife Peta, son Peter and daughter Rosie, Idris Waller, Mr Berry and his son Simon Simon had a Fairey Duckling an 8ft tender, hot moulded under pressure like the Albacore we delighted in taking it out when the wind was too strong to race, blasting across the lake, tacking in front of the Rampsbeck and blasting back to the club a tradition no doubt continued today.

Albacore owners that I can remember are Jack Hartnell, Raymond Foord and his son Arthur (still sailing at UYC, I think) and daughter Kathleen, Mr. Richardson, his son Lyle and Daughter Clare, Ian Miller with his wife Norah and sons Stuart and Alastair, Ron Cree, Keith and Dorothy Coxon, Ian Reid, Robin Barratt who is still racing at UYC. Ian Reid was my brother-in-law and he introduced me to Ian Proctor a memorable moment in my life; Ian Reid was an expert GRP engineer and collaborated with Ian Proctor in producing the original moulds for the Tempest. I attended one of their meetings over one of the first pre-production Tempest hulls at Whessoe's factory in Darlington.

The Bosun at UYC was Arthur Cartwright who owned a Silhouette the main cruiser fleet of the time I think Bill Sharpe had a cruiser, and he was friendly with Malcolm Lawson who sailed a Tempest with wife Judith for several years at the club. There was a thriving Enterprise fleet, led by Arthur Raine and son Michael, and including Howcroft Walton and local policeman Mike Barnard a great guy who died far too young. Arthur Raine and George Dodd started the migration from Enterprises to International 14s. GP14s also had a good fleet I can remember someone called Jenkins, and Dr Kilgour and Harold Couzens in this fleet.

There was also a strong Flying Fifteen fleet led by Selwyn Kirwood and his son John also Mr (James?) Jackson owned an FF with daughter Audrey and son Peter, as well as a doctor whose name, I think, was Anne Davison. I remember the fuss involved in launching Fifteens in those days big vehicles, long steel poles, at least six men, some in waders, and lots of shouting this in stark contrast to the owner I watched launching his boat single handed for an evening race last year.

The club buildings were quite primitive in the early days. The toilets were in a wooden shed on the edge of the car park next to the woods. Through the back door of the main building was a corridor through to the main room with gents changing on the left and ladies on the right no showers and no bar. The kitchen was off the main room I can't remember which end. It was a wonderful club then, as it is now Mr Farrer, a no nonsense Cumbrian, was the commodore when I joined, and he was followed by Alec Snaith, with a continuing list of great people through to the present.

Since leaving the club at around the age of eighteen I have returned many times as a visitor, mainly for Enterprise week in the 1970s with up to 40 boats entering a great family event with socials, steamer cruises, Island Race etc. I sailed the first Birkett Memorial Trophy with my dad and have since competed in the event many times, in different boats, but never come near a win.

So, UYC holds many very happy memories for me and my wife Lesley we met at Howtown Outdoor Activity Centre in 1966 where I was working as a sailing instructor for Robin Barrett. We love the lake and the club and hope to become members again next year, bringing our sailing careers full circle, although probably not in an Albacore!