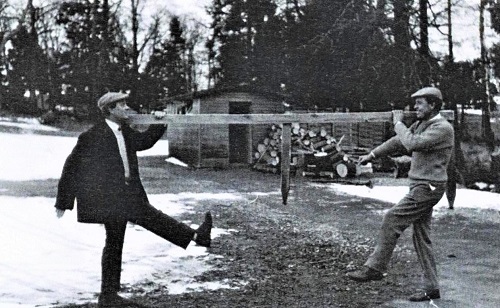 The late Harold Couzens, who was Honorary Vice Commodore and Membership Number 1, wrote his own account of the foundation of Ullswater Yacht Club which details his involvement in the early days. Here are some extracts from his personal recollections.

In February 1958 two friends, Harold Couzens and Joe Harrison, pictured, were in conversation at the bar in the Edenhall Hotel, Edenhall. They were directors of two local companies, The Blencowe Lime Co Ltd and Edenhall Concrete Products Ltd respectively.

At that time, Harold had a dinghy with a small outboard motor which he carried about on the top of his car and Joe had a motor cruiser, a converted lifeboat called Sharko. Harold's other connection with water was that he had been an officer in the Royal Navy during the war and a pilot flying off aircraft carriers. Their conversation turned to boating on Ullswater. In the fifties there were not many yachts or motorboats on the lake and the two friends were talking about the lack of a boating club and the fact, that to their knowledge, there had never been one. Harold said to Joe: "Why don't we start a club?" Joe agreed that this was a good idea.

The search for a site:

Harold arranged a meeting with Mr Jackson who owned Oldchurch on the lake shore but the £300 rent that he required went far beyond what the club could afford. Then he went to see Herbert Grundy who owned the Rampsbeck Hotel and who, after some discussion, said he was prepared to consider leasing part of his foreshore to the club. So the committee met him on the site and he agreed.

The solicitor, Quinton Little, of Little and Shepherd, who was well known to Harold, was asked to act for the club. Herbert Grundy had a change of heart and decided that a yacht club on the foreshore would be detrimental to his hotel business so the whole matter was dropped. Harold then went to The Ullswater Steam Navigation Co. which at that time was owned by Sir Wavell Wakefield, but no progress was made.

His next step was to approach Michael Baldry who owned the Howtown Hotel and a considerable amount of land adjoining the lake. One of his fields was on the South side of the Howtown steamer jetty and Harold asked him if he would lease part of this land to the club. After some discussion, he agreed to let the club have a strip of the foreshore in this field about thirty feet wide for £30 a year.

Unfortunately the site had two drawbacks, a public footpath ran through it and there was no vehicular access. But at least the club now had a base from which it could operate. Harold and Joe bought a load of fencing material and soon had the area fenced off. Michael Baldry allowed members to park their cars in the field next to the entrance to the steamer pier and the first race was held on July 13, 1958.

The move to the present site:

Even though the club was thriving and the members were enjoying themselves, it was realised that the site was not satisfactory and that eventually a new base would have to be found.

Towards the end of the first season, Harold was driving from Howtown one Sunday afternoon towards Pooley Bridge when he saw Mr Allen of Seat Farm bailing hay in the field on the North side of what is now the club site. Harold drove into the field and after discussion about the weather and the size and condition of the hay crop, told the farmer that the Yacht Club was looking for a permanent site on the lake edge.

He pointed out to Mr Allen that the adjacent field to the South would make an ideal place for the club and asked if he would he be interested in leasing part of this. The farmer appeared to be vaguely interested and at subsequent meetings at the farmhouse his interest grew and he eventually agreed to lease to the club about a third of the field with a right of way to it from the main road.

A potential snag was that the Ullswater Ski Club was using the southern end of the field's foreshore as their base. The driving force behind the ski club was Keith Hall who was a friend of Harold, so talks between the two resolved the matter and the Ski Club agreed to move to the Yacht Club's site at Howtown, subject to Michael Baldry's approval. Michael agreed to the move and negotiations continued with Mr Allen. The lease was signed and the club was in possession of an ideal site, ripe for development.

The first task was to fence off the club's land and construct a road into the site. The members soon had a fence in position leaving the problem of the road, which would have cost a lot of money which the club didn't have. The Chairman John Farrer was the owner of the Blencowe Lime Co., a limestone quarry near Blencowe Station. Harold was also a director of this company and he persuaded John that all the work necessary for the construction of the road could be done using the company's men and machines. All the stone and other materials would also be supplied free of charge. His reward was to be made Commodore.

All the boats were moved from Howtown ready for the 1959 season and members started work constructing a jetty and a concrete launching strip.

Urgently required were buoys moored in the lake to facilitate the laying of courses for racing. Major Hasell of Dalemain owned the lake bed where the buoys were to be placed so Harold went off to see him. Major Hasell wanted to visit the site and have things explained to him. Harold had heard that he had an aversion to being driven fast so he took him to the site at a steady 25mph to keep him in a good mood. When all was explained, he agreed to allow the buoys to be moored and moorings to be placed in the club bay for an annual fee.

There was a pressing need for a clubhouse and Alan Miller-Williams, an architect member from Richmond, offered to draw up a plan for a building to be erected on the site. This was approved by the committee and submitted to the planning department of Penrith Rural District Council in 1959. It was passed without any problems.

Bob Mackey was a club member who owned Beacon Trailers Ltd. As well as producing agricultural trailers they built large farm buildings. Bob was asked to submit a tender for the erection of the clubhouse and this was accepted. The members dug the foundations and laid all the concrete. The clubhouse was erected with member Frank Harrison supplying all the insulation for the roof and walls free of charge from his factory.

It was then decided to divert the stream that ran down the South side of the site, straight into the lake instead of it going round the corner into the club bay. So a new trench was dug and the stream then discharged straight into the lake through a large diameter steel pipe (courtesy of Blencowe Lime) to the right hand side of the T-shaped jetty that had been constructed. The original course of the stream was filled in and levelled and this gave a useful area for storing dinghies etc. Very soon it was realised that this was a big mistake as the lakebed around the new jetty began to rapidly silt up so the stream was put back to its original course through a concrete channel.

Harold resigned as Secretary at the AGM on February 23, 1962, after having held the position for four years. The meeting requested that an appreciation of the work he had carried out during the formation of the club and the first four years of its existence be recorded in the minutes.The Commodore commented that Ullswater Yacht Club came into being largely through the Secretary's efforts and that he was sorry he was resigning. At the AGM, held in the clubhouse on October 24, 1964, it was decided unanimously that Harold Couzens and Joe Harrison be made Honorary Vice-Commodores for life in recognition of their services to the club. Harold continued to be a committee member until October 1965.

To see an album of pictures from the early years, click here:
UYC The Early Years